In the witch kingdom Hyalin, the strength of your magic is determined by the length of your hair. Those that are strong enough are conscripted by the Witch Guard, who enforce the law in peacetime and protect the land during war. However, those with hair judged too long are pronounced enemies of the kingdom, and annihilated. This is called a witch burning.

Witchy is a comic about the young witch Nyneve, who is haunted by the death of her father and the threat the Witch Guard poses to her own life. When conscription rolls around, Nyneve has a choice to make; join the institution complicit in her father’s death, or stand up for her ideals? 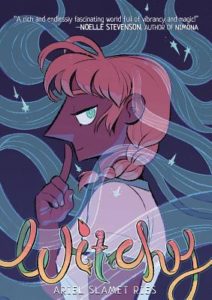 Love the character design of the main character. Some of the panels were a bit small and hard to follow along.

The magic system is a bit goofy but intriguing, it seems like there’s more to it than has been explained?

Plot took a turn midway and went a different direction than I guessed, but in a good way. Will read the second volume.

One reply on “Read Witchy”