Vanessa doesn’t have the luxury of building a happily ever after on a new planet like her fellow alien abduction survivors. She must get back to Earth. Her family needs her, and she can’t afford to let them down again. So, she’ll find a way to break Clecanian law and get home—even if she has to marry (and betray) a sexy space pirate to do it.

Fejo can’t believe his luck when Vanessa, a gorgeous human with a sharp tongue, chooses him as her husband. He doesn’t know what he did to win her favor, but he’s determined to do everything in his power to make her happy. If only he could figure out why his alien bride is so reluctant to accept the kindness—and pleasure—he’s so eager to offer.

Vanessa’s plan was simple. Until she started falling for her ridiculously charming husband. Now, she has to figure out how to get home without breaking Fejo’s heart—or her own. Easy, right? 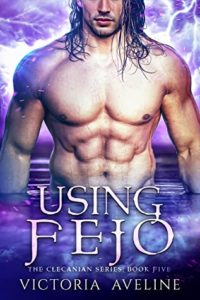 Didn’t like this as well as the previous books in the series, which is disappointing because the hero seemed fun and intriguing. The heroine changed her mind too quickly when he got his marks. The ending took a weird turn — I think the author realized she’d written herself too much plot and the epilogue became where she could do a lot of summarizing to wrap up the loose ends that would have taken too long to tell completely. I would have liked to see the hero get a little more time at the end to cement his better self-value. There’s also no clear setup of who the next couple is — probably Daisy?

One reply on “Read Using Fejo”