As the only Second Daughter born in centuries, Red has one purpose-to be sacrificed to the Wolf in the Wood in the hope he’ll return the world’s captured gods.

Red is almost relieved to go. Plagued by a dangerous power she can’t control, at least she knows that in the Wilderwood, she can’t hurt those she loves. Again.

But the legends lie. The Wolf is a man, not a monster. Her magic is a calling, not a curse. And if she doesn’t learn how to use it, the monsters the gods have become will swallow the Wilderwood-and her world-whole.

Gnarly ending, but fitting. Parts felt YAish, probably because the heroine and her sister are twenty and blindingly dumb sometimes. I had to roll my eyes at the sister a lot — for someone trained to be queen, she is pretty oblivious. The magic system is cool and creepy and very bloody. I like the way the forest itself gets an arc. It’s a good Beauty and the beast retelling, though a weird choice to put so much weight in story on the red cloak, and to put it on the cover, so you expect it to be riding hood 🤷‍♀️

The magically long-haired Rapunzel has spent her entire life in a tower, but now that a runaway thief has stumbled upon her, she is about to discover the world for the first time, and who she really is.

Disney does story structure well. Quite a lengthy introduction to the two love interests before their meetcute around 20 minutes in, but does a good job setting up their external quests. The 50% everything changes beat ties the plot and emotional journey together nicely, his admission of a secret prompting her to share one that then offers a solution to their conundrum. Talk about an all is lost moment SPOILERS he legit *dies* and she thinks she’s lost her powers and her abusive kidnapper who she nevertheless has feelings for has just died also — and then she magically mysteriously brings him back to life (with love?).

(Ugh I can see when this stuff works in other people’s stories, why is it so hard to reverse engineer and apply to mine? 😂😭)

Disney can also be good at humor, when they don’t fall back on body shaming — mime interrupting a chase scene good, mocking a guy who wants true love for his appearance bad. Also they cannot handle not vibing the villain as an oversexualized contrast to the pure innocent heroine, with heavy eye makeup and low cut top in a rich red on the mother and no makeup and a lavender dress on the golden haired princess. Is it just me or is the villain also coded Jewish? 😬 (OK not just me 😬😬😬)

The abusive mother is almost too painful to watch, I fast forwarded through her where I could.

Sigh, they cannot resist those traditional gender roles — irritates me every time that it ends with him teasing her that she asked him to marry her, but then admits he asked her after she complains. Maybe they wouldn’t put that in today? 😒

I bought this a while back digitally on Amazon and hot damn that video quality is bad. Did I not spring for hi def or are they cheaping out on their hosting, because that was dithered and fuzzy.

It’s Zinnia Gray’s twenty-first birthday, which is extra-special because it’s the last birthday she’ll ever have. When she was young, an industrial accident left Zinnia with a rare condition. Not much is known about her illness, just that no one has lived past twenty-one.

Her best friend Charm is intent on making Zinnia’s last birthday special with a full sleeping beauty experience, complete with a tower and a spinning wheel. But when Zinnia pricks her finger, something strange and unexpected happens, and she finds herself falling through worlds, with another sleeping beauty, just as desperate to escape her fate.

This reminded me a little of Sheri Tepper’s Beauty, except that I hated Beauty and I liked this. I really wasn’t sure how this was going to end, and it took some turns I didn’t expect. I like how it played with the Sleeping Beauty fairy tale and merged it with the multiverse, bringing a modernity to the story.

An Atlantis-like city from Celtic legend is the setting of this mythical graphic novel fantasy re-imagining the classic Breton folktale of love, loss, and rebirth, revealing the secrets that lie beneath the surface..

Ys, city of wealth and wonder, has a history of dark secrets. Queen Malgven used magic to raise the great walls that keep Ys safe from the tumultuous sea. But after the queen’s inexplicable death, her daughters drift apart. Rozenn, the heir to the throne, spends her time on the moors communing with wild animals, while Dahut, the youngest, enjoys the splendors of royal life and is eager to take part in palace intrigue. 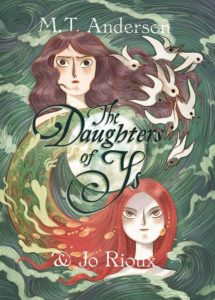 A dark fairy tale, beautifully illustrated. It’s simplistic as many fairy tales are, and predictable, but the telling of it was lovely.

Miryem is the daughter and granddaughter of moneylenders, but her father’s inability to collect his debts has left his family on the edge of poverty–until Miryem takes matters into her own hands. Hardening her heart, the young woman sets out to claim what is owed and soon gains a reputation for being able to turn silver into gold.

When an ill-advised boast draws the attention of the king of the Staryk–grim fey creatures who seem more ice than flesh–Miryem’s fate, and that of two kingdoms, will be forever altered. Set an impossible challenge by the nameless king, Miryem unwittingly spins a web that draws in a peasant girl, Wanda, and the unhappy daughter of a local lord who plots to wed his child to the dashing young tsar.

But Tsar Mirnatius is not what he seems. And the secret he hides threatens to consume the lands of humans and Staryk alike. Torn between deadly choices, Miryem and her two unlikely allies embark on a desperate quest that will take them to the limits of sacrifice, power, and love. 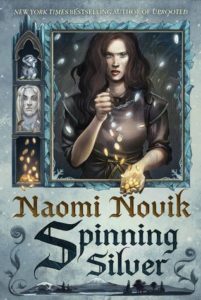 This book is so good. I think it’s a better book than Uprooted though I love Uprooted a little more 😉 On first read the multiple POVs were trickier to follow – this read I just got hung up on a couple Wanda chapters towards the end that I thought would be Stepon’s.

Fairy tales provide a template for much of our modern fantasy fiction, and for enduring constructions of disability that come loaded with stereotypes, harmful messaging, and a tendency toward tragedy. In this presentation, we will explore those tropes and how disabled and chronically ill writers have subverted and transformed them.

Trad fairy tales feature elements of the fantastical, possess their own internal logic, and may involve a quest

Examples of fairy tales with disability:

“In fairy tales, the transformation of the individual relies on fairs and magic – or the gods – because it is understood that society itself can’t (and indeed won’t) improve” – Amanda Leduc, Disfigured

Burden of transformation is on the individual

Grimms added disability to their stories a lot – able-bodiedness was the idea, not the norm

Something that is needed > something added > balance (lack > fulfillment) (disability > ability)

“Reading disability merely as a metaphor for something else is in itself a form of erasure, because it abstracts the disabled individual.” — Ann Schmiesing, Disability, Deformity, and Disease in the Grimms’ Fairy Tales

“We turn disability into a symbol because it has been socialized to be not useful…” Amanda Leduc, Disfigured

Join us for a discussion on updating fairy tales for a contemporary audience! What are the rewards and perils of wandering along this magical path? How closely should retellings follow the original tales – and how do retellings decide what to toss, and what to keep? How do writers handle the thornier aspects of the source material? And do these choices help explain why we still find fairy tales so compelling?

Perfect for fans of A Court of Thorns and Roses and Uprooted, this stand-alone, fantasy romance about a human girl and her marriage to th…

Enjoyed this Hades/Persephone spin with dark elves and humans with plant magic, I’ll read the next book. This was my first read from Elise Kova. Interesting worldbuilding and magic system, though I would have appreciated seeing a little bit more limitations on it. I liked how the heroine drew out the hero but also that his reasons for acting the way he did became more explicable as she learned about his experience.

Some minor quibbles I had were related to it feeling a little YA, with the heroine acting pretty dumb several times towards the beginning of the book. I was also a little frustrated it took so long for her to come to her senses at the end of the book as well, and feel like it would have benefited from a little bit more of a denouement. The added epilogue chapter from the author’s site helped that.

Amarrah Brewer is desperate and grief-stricken. For ages, the town of Bitterburn has sent tribute to the Keep at the End of the World, bu…

Nice reimagining of Beauty and the Beast, faithful to the original story with dashes of inspiration from the Disney movie.

Reminded me in story but not in tone of Ursula Vernon’s version, Bryony and Roses, with a magical garden and whispering voices and two mysterious forces battling each other for the keep and it’s inhabitants.

The premise reminded me too of Uprooted, but the tone of this was somehow darker. It’s an interesting contrast in retellings, both young women making a meal as their first task at the castle, where in Bitterburn the heroine is deadened to the world with depression and abandonment and settles in to survive with cheerless competence, while in Uprooted the heroine has been torn unexpectedly from her home and family and is convinced she’ll be killed or raped and can barely hold herself together.